THE FEDERATION, masters of the art of DOCTOR WHO parody videos, began work on the ambitious THE REIGN OF TURNER way back in 1987. Principal photography was completed in 1989. Conceived as a serial in three 30-minute parts, the final running time was over two hours. The three-part version has been shown at several conventions, including Visions.

The makers of the film let the project rest for a while, retaining a desire to re-edit a movie format version with a running time of just over an hour. Well, the planets aligned in just the right way in December 1995, and we started re-editing from the 18 hours of footage. After completion, the movie had its premiere extravanganza at November's Visions 96 convention in Chicago. The movie had three showings, each attended by 8 to 10 people. The first showing was good, keeping the viewers laughing, and the third showing was a wild success with constant, exuberant laughter and one gentleman who kept falling off his chair because he was laughing so hard.

The movie was also shown recently at the Gallifrey One convention in California thanks to Scott Woodard. Scott has written a review of the movie available here. He initially didn't want to show parody videos in the fan room, but had to fill the time somehow. To encapsulate the review for you, he had quite an overwhelmingly positive reaction to the movie once he saw it!

THE REIGN OF TURNER is now available for ordering!

NTSC format only at this time (PAL coming soon). VHS or Beta (please specify if you want Beta).
Send a check, money order, or cash-at-your-own-risk.

THE REIGN OF TURNER

The asking price for a copy is $15 - that includes the 83-minute "Director's Cut" version of the movie in a heavy duty plastic library case with full color cover (as you see above). We're trying to raise money for an ongoing series of fan video productions (one a year) and of course to cover the expense for our current production Realitywarp so we encourage additional donations. To date, production cost for "Realitywarp" is at around $1,000 and will be closer to $2,000 by the time we've finished.

PLEASE NOTE: This movie contains one use of the "F" word.

I currently have copies prepared and ready to ship; please allow a few days. You can always contact me by email if you want to know the status of your order. My email address is just below, or you can use the link above ("...must choose above, between, below!")

One more thing: I'd GREATLY appreciate reviews (good and bad), either emailed to me or posted to rec.arts.drwho or drwho-l or allenrd mailing list,
and submit your rating to the Internet Movie Database, too. Cheers!

CURRENTLY IN PRODUCTION: The Federation's FIRST "serious" fan video. Remember, we've never "played by the rules" and we're certainly not this time. Realitywarp is set for its premiere on Sunday 29 November 1998 at HME/Visions'98. The story is a twilight-zoney, pleasantvillish yarn in which the time/space vortex is flexed enough to allow actors Nicola Bryant and Colin Baker to come to the rescue of a trapped Doctor and Peri. To check out the production diary and more information about Realitywarp go to the Realitywarp site. Or you can check out the entry in the Internet Movie Database.

These screen captures were done for a black-and-white advertising flyer for the movie.
They are not designed to be clickable thumbnails, but some screen captures and possibly
motion video files will be added here soon. The production stills seen below ARE clickable.

Email questions to: Steve Hill or to Jennifer Kelley

To see the Federation's holiday snap (77K JPEG), click on the thumbnail below 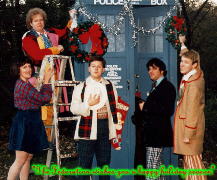 © 1996,1998 Steven W Hill and The Federation. The Federation is a not-for-profit organization. And we actually sort of like Turner, so there.